When I write this, the European Parliament is discussing EU support to internet connectivity in rural areas. This is good and important.

The aim is that "by 2020, all Union citizens have access to much higher internet speeds of above 30 Mbps and 50 % or more Union households subscribe to internet connections above 100 Mbps."

In Marttila - my small village in Finnish Capital Helsinki - we have already reached this, and indeed even more. This has been done entirely at our own expense, without any outside support. Much of the work has been contributed by villagers on a voluntary non-paid basis.

The cooperative owned Marttila network is not large by any measure, and the homes in the village are pretty modest. They were built on city owned land in the late 1940s, by and for war veterans.

The large majority of the 100 plus mainly single family houses in Marttila are now connected through a fast and high capacity optical fiber network. It offers symmetric speeds between 100 Mbit/s to 1 Gbit/s. Even higher speeds are possible, and have been tested. I doubt that many would have opted for the few lower speed alternatives that are available...

To choose optical fiber instead of relying on wireless connections through one or another of the big telecom operators was clear for us from the beginning. As the mobile phone networks get increasingly congested, which is already happening here in Helsinki at times, connections slow down and become much less reliable.

The connection that I use now is through Telia and gives me speeds clearly above the 100 Mbit/s. The upload speeds that always tend to be much lower are identical to downloads which is a major benefit. Imagine the improvement for a friend of mine here who is a graphical artist and who now can be sure that his works rapidly fly off to their destination without having to slowly grind for ages. So, optical fiber is the only sustainable solution that carries far into the foreseeable future.

We also wanted to own and control our own communications. This is now reality as our cooperative brings four fibers to each home instead of the single one that operator-owned and managed nets do. Multiple telecom operators, large and small, sell their internet services directly to our members over our network that connects to theirs.

One of the reasons that we started to build ourselves was the lack of interest from others to do anything here. The European Union or the Finnish government focus on rural areas and want urban regions to be built up by commercial actors. The telecom operators on their side are uninterested, as neighbourhoods like this are too sparsely populated from their point of view.

The village network is interesting also as it is the first of its kind in an urban area. Today it proves that not only big multinational businesses can build these networks but also grass-root users themselves.

Ok, of course we were lucky to have some really skilled neighbours who were committed to the project and who have done a great unpaid voluntary work for us all. Great contribution also to the togetherness across the many generations who live in this green oasis - ok it is much more snow-white in the winter...

Jan Furstenborg / Member of the Board of the Cooperative

More pictures from the project.  https://www.flickr.com/groups/helsinginvalokuidut/pool/with/36468216880/ 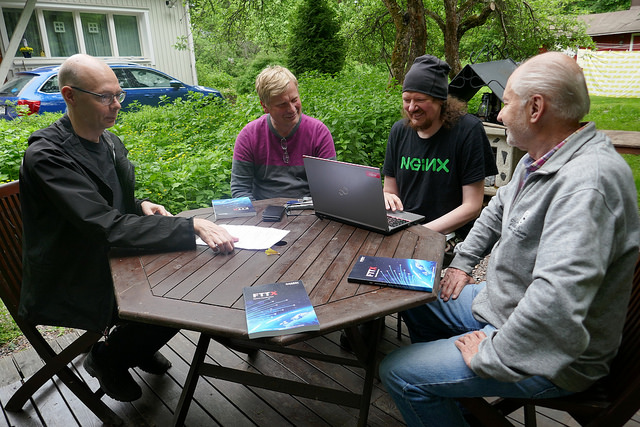